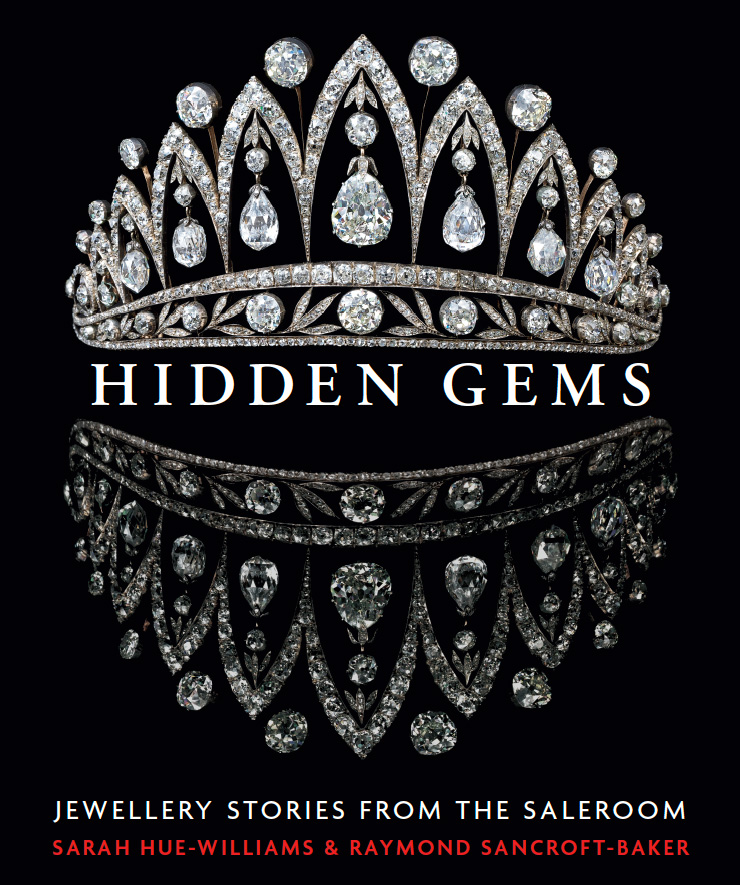 with a Foreword by Lord Linley
ORDER ONLINE NOW

‘In Sarah and Raymond, we could not have wished for two better people to have written a book about jewellery. They have produced a compelling read, which is all the more refreshing because it gets behind the usual information to tell the real stories about gemstones and jewels, and the many personalities involved with them. To read such a great variety of stories has been a real pleasure.’

Showcasing jewels and bringing them to life, these 40 stories are an intriguing blend of art, science, history and psychology, tracing the lives of jewels and all those connected to them. The authors have brought their considerable knowledge and experience of handling jewellery and gemstones to compile a beautifully illustrated book of stories in which the jewels are not always the most expensive or ‘important’ to have passed through the saleroom. Instead, they focus on those that have an intriguing history or provenance attached to them.

Spanning diverse cultures and countries, different time periods and design eras, the stories allow us into the private lives of those who have loved and lost jewellery, who have owned and treasured, commissioned, designed, created, given and received it, and who have marked the most memorable moments of their lives with it. The stories in this very different type of jewellery book have never been shared publicly before, and all of them are true.

Sarah Hue-Williams is a freelance gemmologist, jewellery historian and lecturer. Winner of the Anderson Medal for Gemmology, she is a Fellow of the Gemmological Association of Great Britain, the Gemmological Institute of America, and author of Christie’s Guide to Jewellery.

Raymond Sancroft-Baker joined Christie’s in 1969 and was European Jewellery Director there for over 20 years, working in London, Geneva, Hong Kong and Los Angeles. He is a Fellow of the Gemmological Association of Great Britain.

CHAPTER 1 - A KING OF KINGS

This historic 32 carat pink diamond once belonged to the First Mughal Emperor of India and was rumoured to have been smuggled over to England by a soldier who hid the stone inside his horse. The unfortunate animal died on the voyage, the wily officer pleading to have a few last moments with his trusty steed, affording him the time to retrieve the diamond before the horse was jettisoned overboard. It was sold by Christies in 1905 for £5,000 and then again in 1990 for £4 million, having been kept in a box under a tree during World War II.

When we sold Christina Onassis’s jewellery collection it included a carved figure of a Buddha made in bowenite (a less expensive substitute for jade). The family had been thinking of giving it to their long-standing maid who loved the piece, until they were told that it was worth £10,000 for insurance purposes. While cataloguing it however, a colleague found a very similar figure in a book on Fabergé. We called in our Russian expert who hurried over, and promptly broke out into a cold sweat, exclaiming that this was indeed a missing masterpiece. Just in time: it sold for over £1 million in 2007.

When the department received a telephone call one morning we could hardly hear the faint voice at the other end of the line, explaining that he had a brooch for sale and what should he do next? We explained that the best thing would be to bring it to the office, or to send it in by post. The next day a plain brown envelope arrived, without any protective wrapping whatsoever, and inside we found an enamel orchid brooch by Tiffany, one of their signature jewels of the late 19th century. Without a scratch on it. Our client, aged 93, had sent the equivalent of a champagne flute to us in the mail, yet it survived unscathed and fetched £36,000 on sale day.

When we sold this ruby necklace for £875,000 in 1996, we knew it was one of the finest Belle Époque examples we had ever seen, never anticipating this might ultimately prove for nought. Immediately after the sale it was all we could do to contain ourselves as we saw the purchaser bring out a penknife and calmly proceed to pop the magnificent rubies out, one by one. When we politely asked why he was destroying such a wonderful piece, he simply said: ‘But you must know? It was only ever about the rubies’. Not a story with a happy ending, but one which illustrates why the finest antique jewels are growing rarer by the day, broken up for the intrinsic value of the gemstones used in them.